Well its been a short while since even a post was added here.. over the last couple of months GFB has had spraying going on with the Beetle and the MG Midget… Below is a short clip of the Midget going through its major improvement, because it did look horrible before..

Well it’s Good Friday, and I’m sure the Midget is happy now because it’s been stripped of parts and is being sanded ready for primer, if ‘Butler’ has his way it may even end up with its Blue paint on but realistically it may probably be just primered.. So next weekend will more than likely see Blue’ appear!
Picture below, possibly more to follow over the next day or two! Before this weekend this is how the car was… Horrible Green Hammerite in patches, and two shades of blue, one hell of an improvement since.

Quick update, all go at GFB with regards to the Beetle, all panels getting a coat of ‘Glacier White’ surprisingly!! Picture of Bonnet and Boot lid for you!!… Then further down as the day went on more pics were added in.. The car has come a long way since its arrival in November! Well its been a while since any videos were made so i got some unseen Go Kart footage from last year and made another clip.. in it Leebo crashes it into some trees, only thing is was that he was quite a way away from the cam so look into the distance close when watching, in the first two minutes or so its there, (from 17s to 22s),  ‘NGFB‘ laughs so when you have seen that you know its happened.. in fact EVERYONE there at the time laughed.. its also the very last clip on the vid too..
(Sorry for quality, been having trouble ALL day yesterday with rendering) anyway, Enjoy!  New Video with slightly more footage now below!

Just for the Record here.. After venturing to GFB today for a short while i notified “NGFB” that the Camera hasnt been working for a short while, he looked into it and remembered that the software needs re-installing on the DNS,,, ?? Bloody confusing to me.. not networked much with webcams myself, on another note the Beetle is in a sorry state to view but coming along in progression states, more filling to be done as the first coat of primer reveals small imperfections, but its still at the stage of being sorted anyway, its not as if its had a colour added and then found out it has to be resprayed again.
Well, thats all i have for now, hopefully we will have a seperate page soon for the webcams.. just waiting on Butler to sort the software. When it does go back on the Camera will more than likely be on to view on a weekend, or just a Sunday. Only time will tell. One thing though, its not as if there is a shortage of cars up there! Plenty still in the queue!

Well sadly due to partying and booze and Christmas and New Year not a hell of a lot has been done, The beetle still has small bits being added to the parts list and they are all sat waiting to go on, last i was told was the Beetle only had one last bit of welding left, at the bottom of the inner rear arch, the small plate is cut out and just needs adding to the car!

As for other cars, the Capri and Midget are both covered over, Capri back in later Spring, and Midget no doubt back in the garage when the beetle is out of it, the Blue Midget is awaiting its paint which will probably be later this year or even next year, who knows.. only “NGFB” does really… The old Austin sits patient as usual with some Zinc Primer patches on the roof, GFB will be attending to its bodywork when the time is right..

Corsa, well its hardly used at this time but still runs as good as ever, Orange side repeater bulbs have been replaced, but apart from that the weather needs to warm up before anything else happens.

Leebo.
Lee has picked up another car now, he has the Beetle in the garage and a Freelander to roam about in normally but last weekend saw him purchase a nice buy from a mate he got his green POLO off.. He now has a VR6 Passat B4 in his possession, on looks its quite plain, in need of a small touch up on some paint and Lacquer, the colour is a dark Red Metallic with a Black roof, it sits low too, all it really needs is a nice set of wheels. Engine is fast too and sounds nice.

Well thats all i can add for now, more as it comes i suppose..
NOTE: Webcam/s , NGFB has said a new PAGE on here is wanted for two webcams, as one isnt enough to see different views all the time, it always has to be moved.. we will see what he comes up with to make viewing better, a newer camera has been given to him by Eden, so when NGFB gets them where he wants them the camera link will lead to a new page with cameras viewable all going well!

Well today we finally said Goodbye to bad CRAP!!! Pug 306 gone to Sims Metal! I filmed the Big Claw picking it up and then moving it to one side..

Anyway, a few pics were taken before and after its arrival at GFB.. i gave it a wash and due to the mildew and god knows what else on it this was the longest car wash ive ever done.
Pictures in the Gallery from Today!

Whats been going on?? Well Butler has been making his garage a bit more roomy lately with the removal of the Midget, whilst getting ready to sort out the “Soon to arrive” Beetle! (Saturday should be the day).
Goodbye BAG OF CRAP PUG CABRIOLET and Hello old Classic!

The garage has a large OLD bench that was turned round creating some more room and also some steel plating with lips on have been put above to hold the many plastic containers of bolts and bits.. Car-wise.. the Corsa has just not long had some colour sanding and all is ok so far, got to finish it properly because the passenger side hasnt even been touched yet.
On another note it went straight through its MOT today and only has a few little advisories..

Drivers wheel slightly buckled.
Drivers mirror misty, (Due to putting compund on it to remove scratches) TW*T!
Front side repeater bulbs need replacing soon, Orange paint must be flaking off..
Small surface rust on rear inner sills, so soon to underguard after effing off the rust!
Slight Blowing on Exhaust, (Front pipe with CAT connecting to Middle box, its about due anyway)
And thats it.. all ok otherwise.. If anyone has also just had a new MOT then you may have a new certificate!
Arent they all boring and plain now!! Cheap Asse’s!

With regards to other cars Butler’s Capri is in need of Brakes sorting out due to Master cylinder giving up the ghost!
Leebo’s Land Rover seems to be running ok apart from the odd warm up of the engine now and again. aka “Overheating”
Hine’s bike Failed MOT because its a BAG basically… hahaha.. Faulty Brake light plus reccomended near future replacement of fork seals..

Isnt life good!, Cars that always have something to do or sort out! And Winter arriving very soon to keep us all from doing them outside! Thank god the garage now has a space for the beetle!

More soon from Butler i hope! No doubt if all goes well on Saturday we will be seeing Beetle pics of it arriving at GFB! 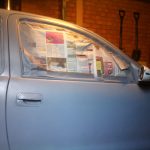 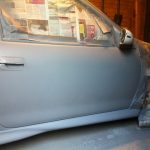 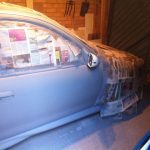 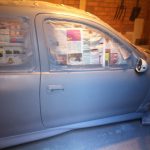 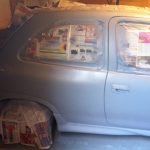